Future visiting the past

. She was pleased that it called the work a “delightful New York-infused novel.” The first sentence of the review goes on to say:

…his future self shows up, warning him that the couple will end up having a child whose early death will ruin them. And so the younger self is persuaded to leave his fiancée, known as Q, to avoid such an awful fate.

I thought about that afterward. In fact, early on after Emily died, I thought a lot about whether it would have been better never to have had her at all. I’m not talking about terminating when we found out the diagnosis, but just having made different choices so she wasn’t conceived.

I played with all sorts of timelines in my head, since I was a storyteller faced with an impossibly large unfinished story, a life reduced to a hundred grainy photos and a pair of footprints. If we’d just never had her, would we have missed her? What if I’d done things differently early in the pregnancy that enabled her neural tube to close so she would have survived? And then, six months later when I became pregnant with Kiddo#2, it occurred to me that if Emily had survived, maybe my cycles would have been messed up enough that I couldn’t have had Kiddo#2, and then I’d have lost her instead.

Back then I wondered, if there are alternate realities, maybe there’s one somewhere in which I have both girls, only I don’t appreciate them.

But here’s the question I kept coming back to after reading the review: was Emily’s death so tragic, so “ruining,” that it would have been worth not marrying my Patient Husband in order to avoid losing her? And no, even in the middle of the calamity, I would have said “Are you crazy?” We worked through her death together. We grew because of it — together. And while I know some marriages are broken up by the death of a child, and too many families are bankrupted by the long illness of a child, I’m not sure that means it’s better if the child never existed, the marriage never existed, the family never existed. 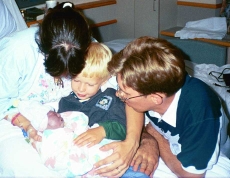 We were, very briefly, a family of four. I thanked God for having her. She changed me because of how I was forced to parent her for a lifetime in only 43 weeks, 3 days, and two precious hours. If I were to visit my past self, I’m not sure what I’d tell her. Maybe I was prepared as much as I could possibly have been.

I did put the book on my wishlist.