All right for now.

You may remember how we recently acquired a Betta fish. During my absence, I had a birthday, and I decided to get a real fishtank, with lots of fish rather than just one. It will be my own little ecosystem, and everything will be great.

As it turns out, when you own fish, you need it. Or rather you need this version of it: “Fish pee into the tank. You need bacteria.” Because until the bacteria build up, your fish might poison themselves in their own ammonia output.

Consequently, when I first set up the tank, I very carefully added our first pets: about thirty billion bacteria in the filthy water squeezed out of the fish store filters. I left them alone to breed. And for a few days, so help me, I fed them.

At any rate, now I have fish. Cardinal Tetras, and they’re adorable. I didn’t think fish would be adorable, but these guys are. Since they’re “community fish,” they need to school together, so I got six. 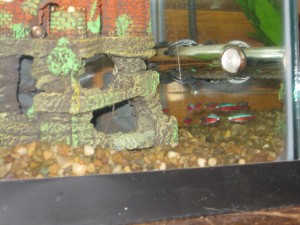 When I first got them, still in their plastic bag from the fish store, I’d find them all lined up in the same direction in the bag. One, two, three, four, five, six.

And now they hover in the 20 gallon tank, all clustered up in one place, moving around as if they’re tentative on their own and yet happy together. Sometimes five will swim away while the sixth is facing a different direction, and then that one will realize in horror that s/he is alone and dash back to the others. 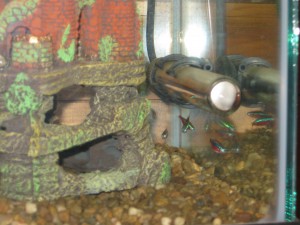 Or as I watch, one tiny fish face will peer out from behind a plant, followed quickly by two, three, four, five, six. And then all six will dart back into hiding.

I’m worried about them.

They’re brightly colored and active. I’m doing everything I can to cycle the tank without harming them, but I’m afraid. I don’t want them to die.

A friend said, “You’re the only person who would get something that’s supposed to be relaxing and then worry about it.”

And every time I look at the tank, I get this momentary fear. One, two, three, four, five, six. They’re still all here. For now. 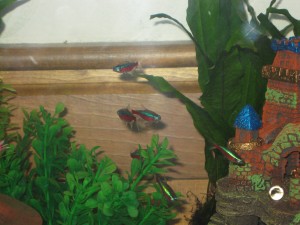