Because my life isn’t entirely about fish and knitting, you know. 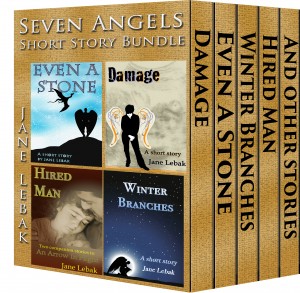 Come meet an angel punished by having to sit on a rock for three years. (He’s okay with this — it could have been a lot worse.) Find out what happens when God enacts a Creation-wide self-esteem initiative. (Because as it turns out, tossing sinners into Hell was seriously damaging their self-esteem.) Check out Satan’s staffing problems and what happens when guardian angels form their own online community. And on a more serious note, what happens to a guardian angel whose charge falls into Hell. Or an angel who knows he shouldn’t have been made a guardian — because he’s a demon.

This, my friends, is a short story ebook bundle. If you’ve been hanging around here since 2006, you’ve seen some of these stories already. If you’re new, well, they’re new to you. All of them are about angels (or demons) and most of them were previously published in magazines (although not all online.) Two of them won awards (ooooh! can I call myself award-winning? Or am I just award-whining?). Two of them fit into the chronology of An Arrow In Flight (but just didn’t make it into the book.)

The four covers on the front are because you can buy some of the stories separately. (Even A Stone is available for free everywhere but Amazon, but I’m working on that. The other singles are $1.) In addition there are eight other shorts only available in the bundle. The Bundle costs $2.99 because I want you to buy the bundle rather than just the singles.

Then I’ll need to ask for patience because Smashwords has rather stringent guidelines about how to get things formatted for them, and I don’t really know how this is going to work. After it’s uploaded to Smashwords, then I’ll send my first-ever Jane Lebak Mailing List message, and you can get your free ebook.

In the meantime, if you’d prefer to pay actual money for the stories, you can go ahead and get it at Amazon, Kobo, Barnes and Noble, and a few other places.

Later! And maybe I’ll have some knitting pictures to post someday too.