Short Story: A Rock For Christmas

This originally appeared on the MuseItUp blog, but they took it down, so it’s going up here instead. Enjoy!

A Rock for Christmas

A check of the core showed the fusion reaction under tight control. Relaxed for now, Orithnael slipped up to the surface of his star to gaze out at the universe. Soon he’d have to shield his star against a supernova that had exploded ten years earlier, the shock wave only now reaching him, but for the next hour he could stand down. Well, stand down as much as any angel could when assigned guardian of a star.

The angel triangulated his orientation based on several familiar formations and the distinctive smudges of other galaxies. In front of him, the star ejected a solar flare, but without any planets to protect, Orithnael moved to a different part of the surface to continue stargazing.

By now he could make out the advancing wave front. He started to call to one of his friends to share the view, but then stopped. The blast would be spectacular, but most of his friends were stationed on Earth, where they were celebrating Christmas. Why pull them away from their duties to keep him company during a stellar phenomenon that meant nothing to them?

When first stationed here, so long ago he couldn’t keep track, Orithnael had loved keeping the newborn star at a high burn. What an honor to be a guardian! The instructions he’d received recommended a lower rate of fusion, but the star had burned so naturally at a higher rate. Too late, Orithnael realized his energetic star had ejected all the matter from the planetary zone and into an exceptionally dense Oort cloud — and there the smaller chunks would never get up a high enough gravitational pull to join together.

Who’d have thought of rock as so important that he’d ache for its absence? His star was stable, but this solar system would never have a planet.

And so, with no planetary guardians to banter with, Orithnael had settled in for a few billion years of catching up on his reading. That and what he’d come to know was the norm for guarding a fusion reactor: long days of boredom punctuated by moments of panic.

Another glance over his star, and Orithnael adjusted the core temperature. Then he settled down with a technical journal only to find himself surrounded the next instant by white-robed angels. He burst out laughing when they began singing “For Unto Us A Child Is Born.”

When the song ended, he applauded. The angelic choir treated him to a multiple-part performance of hymns, carols and a few rock songs. In between pieces, Orithnael monitored his bright reactor.

At the end of the caroling, they gave him three books he’d had on hold at the heavenly library and passed him news from home. He knew the human custom was to invite carolers inside and offer hot apple cider, but he had neither an inside nor cider, so he only thanked them. But as they prepared to leave, he had an idea. “If you wait, you’ll see something spectacular.”

The shock wave had nearly arrived. He explained about the supernova, and how first they’d see the light, and shortly afterward feel the blast. The angelic carolers waited, solar plumes curling around their feet, all facing the same direction.

As Orithnael had said, first they witnessed the brilliance, the glory of a star’s life at its close, and as their awe ebbed, then came the shock wave. The asteroids and other matter in the Oort cloud vibrated, at first only a little, and then like an ocean shoreline, the dead star’s wave of particles and radiation smashed through, changing their orbits until they churned like ice in a blender.

Seconds later, the wave blasted into Orithnael’s star. The angelic carolers cheered while he shielded his little sun against having its corona stripped off.

Five minutes later, the carolers had vanished to serenade another star’s guardian angel, and Orithnael examined his reactor for problems. No change.

He looked up to stargaze — and gasped.

The energy of the supernova’s shockwave had disrupted the orbits of the rocks in his star’s dense Oort cloud, which still whipped around like sand in a hurricane. The chunks of crumbled comets and icy planetoids lost velocity as they collided with one another. Under these new gravitational forces, the objects began a long fall to the innermost reaches of the star system. Because of the shockwave, a new debris disk would form around the star.

Open-mouthed, Orithnael watched as the largest icy planetoid began its plunge into a stable orbit in the inner system. Before it had been one of those neither-this-nor-that planet-like objects. But now — now in the planetary zone —

Even as his mind raced through the possibilities, a second angel appeared in his system. The angel hovered over the potato-shaped rock, then waved to Orithnael, eyes brilliant with the delight of a new assignment as a guardian.

Guardian of a planet. His star would have a planet.

The new angel got to work sweeping the debris into a disk now surrounding the star, shepherding it into orbit near the chunk of the pre-planet.

Thank you. The angel folded his hands over his heart. Thank you for my Christmas rock. 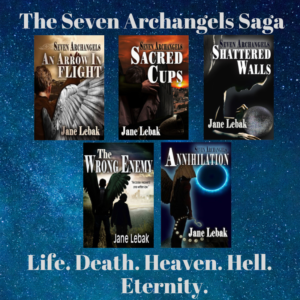 Thank you for reading! If you enjoyed this story, please check out my other angel stories at Amazon.